Who is Bruce Dwyer? A people analysis

Having the name Bruce Dwyer I was personally interested in seeing if there are any similarities between people who hold the same first and last name as me.

These people were primarily contacted via ‘Facebook’ and the results of a simple survey are given below. But before I get into any analysis it is useful to see some history of the two names.

The name Bruce is Celtic in Origin, and has the meaning of:  Woods or Thicket. Geographically it heralds from a Norman French origin and was originally used as a Scottish surname – the most famous owner being Robert the Bruce.

HISTORY OF THE DWYER CLAN

Dwyer is obviously of Irish and Gaelic origin, and its meaning is "dark wise one". It is a very common last name for both men and women (#1368 out of 88,799 - 1990 U.S. Census). Originally the name came from O'Dwyer which came from the Gaelic ó Dubhuir, meaning "black". The name originally translated as coming from the “grandson of Duibhir”, an ancestor who lived sometime around the tenth century. The common modern belief is that the name refers to 'black and dun-colored' - a reference to Duibhir's hair coloring. The Dwyer clan was part of a group of people who were phonetically grouped together along with O'Dwyer, Dwire, Dwier and Dyer.

It is curious that in this modern day (21st century), that the parents of Bruce Dwyers' chose to combine names of Scottish and Irish ancestry. A more detailed site based in Ireland and celebrating the clan O’Dwyer / Dwyer suggests that the group comes from an “illustrious Celtic family of warriors”. Ref 2 It is said that the ‘O’ in O’Dwyer was dropped mid 17th century because of pressure by the English government to suppress the ancient Irish culture and clan system. The main territory that was under control of the Dwyer’s was the ancient district called Kilnamanagh in County Tipperary, Ireland. The Cromwellian wars of the mid-seventeenth century saw the clan scattered with many moving to mainland Europe and modifying the surname to ease local pronunciation (eg in France Dwyer is 'Haudoire')

This may suggest that when the names are joined it creates a person who is somehow related to an area of woods / thicket and is a dark (haired) wise one.

The creation of crests began around the 8th century and the symbols represented what the clans stood for. Reference 5 suggests that the colour red (Gules) represents "Warrior, Martyr, Military Strength" The lion on the shield represents "Fierce Courage". In Ireland the Lion represented the 'lion' season, prior to the full arrival of Summer. The symbol can also represent a great Warrior or Chief." ref 5 The helmet represents "wise defence". 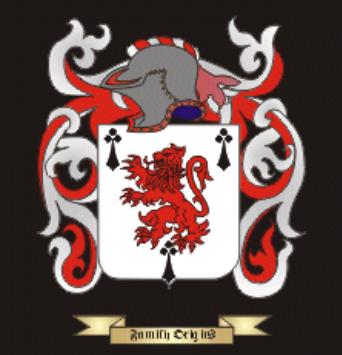 Below is a table of answers provided by a small sample of people called Bruce Dwyer around the world. The questions were kept very simple and short because as it turns out, we Bruce Dwyer’s are a sceptical bunch, wary of giving away personal information in this time of identity theft. As my data is included in the sample I ensured that the answers are unlikely to unlock anything too secret.

These people seem to have quite a few similarities. Considering that many of Bruce Dwyers’ ancestors left Ireland in the 18th century and many of the their modern day partners were unlikely to be of direct Irish decent it is interesting how ‘pure’ the blood lines have been. I am saying this with a little more insider knowledge of other physical features gained by publically available photos of these people. From the table you can see that the sample is mostly for Americans.

There are some basic commonalities between these men in that they mostly have brown hair and are 6 foot or taller. Eyes are often green blue or blue. Ages are typically over 40, which is in line with the decreased popularity of the first name since its peak in the 1940’s. That’s is, there are few young people who have the first name Bruce, so respondents who are named Bruce Dwyer are statistically likely to be of an older age group.

Most Bruce Dwyer’s have a middle name that is Anglo-Saxon in origin of between five and six letters.

A few of the occupations are technical and analytical in nature, which to some degree goes a long with the numerological expectation quoted above.  All partners were female and similarly have relatively short first names of between 4 and 6 letters.

Favorite colors are widely dispersed although two of the five respondents colours were red, which is the main color used on the family shield. Movie preference tend towards the action / drama genre.

ALL Pet preferences were for Dogs.

While it may be representative of the age group (Gen X and Baby boomer), ALL respondents had email addresses with their first and second name included in it. These serious analytical people take a no nonsense approach to life, and get on doing the things they enjoy in work and play.

If you know of a Bruce Dwyer who has not responded to this survey, please have them contact me for inclusion.

Thank you to all Bruce Dwyer's out there, you intelligent handsome bunch of leaders!