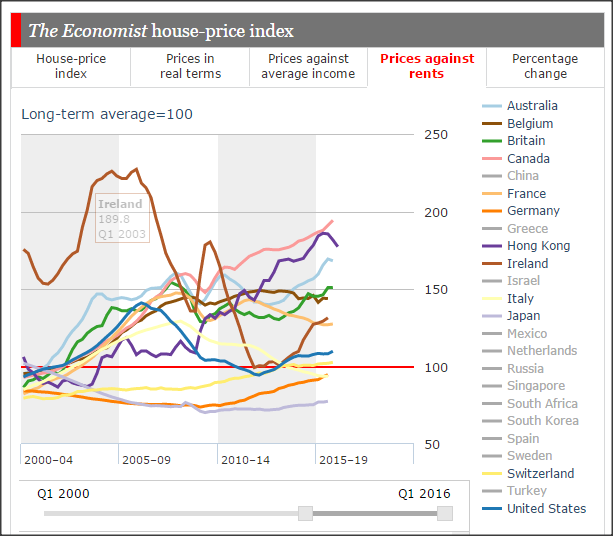 Compared to the rest of the world Australian house prices and rates are some of the worst.

This means that home owners have the double w\hammy of over priced housing AND over priced rates.

Rates are at least 50% higher than they need to be and this article looks at the global house price situation and what a fair council rate in Australia should be.

The following article looks at the history of house prices globally in raw and adjusted terms and posits that Australian Council rates should be tied to yr 2000 housing prices and adjusted by inflation for every year from then on.  That way council rates would have only increased near 50% since 2000 rather than the current 100% plus amount (because rates are tied to inflated housing prices). 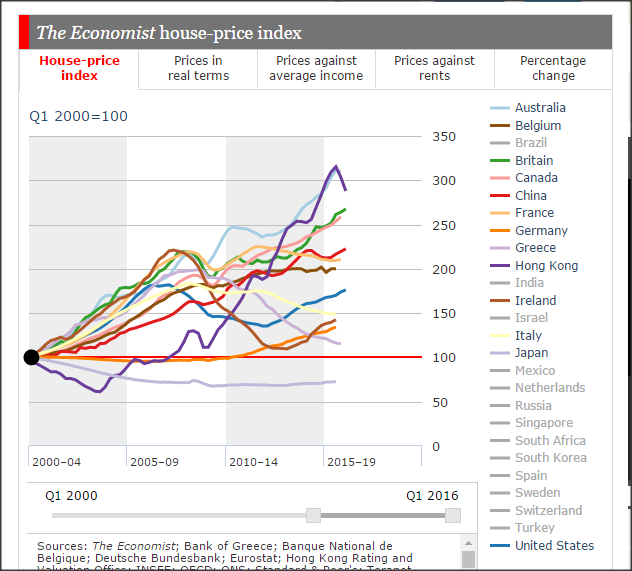 Of the first world/ developed countries the top five countries appear to be:

Countries such as Greece pretty much started and ended their house price value at the same amount after a good increase around  2009 then a dramatic decline.

Europe is a curious case for house prices  Germany has only had a 25% increase since 2000 and most of that occurred in the last few years.  Italy has had in increase as much as Australia  while France has only approximately doubled house prices in 16 years. Similar to Spain and Netherlands.

Japan is one of the few developed countries where house price valuation is actually negative (about 25% down on what they were in 2000). 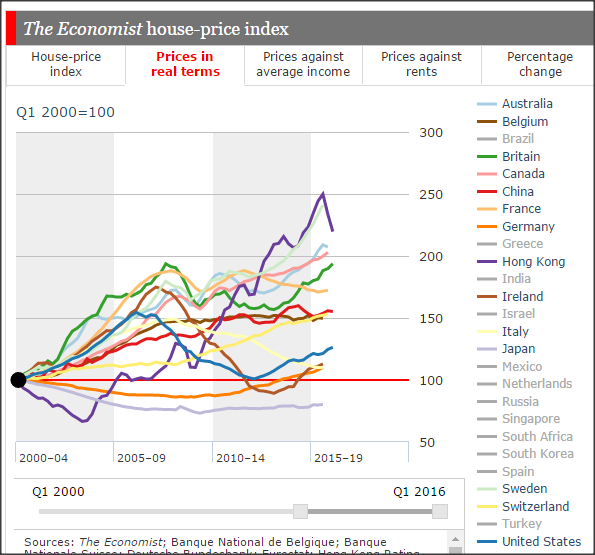 I thought that perhaps the dramatic increases would all make sense if inflation was factored into the equations, but if you click on the Economist graphs (REF 1) for Prices in real terms, most country graphs stay the same, just that the absolute scale of the graph is compressed downwards so that countries like Australia and Hong Kong have a value of 225%  rather than 300%. 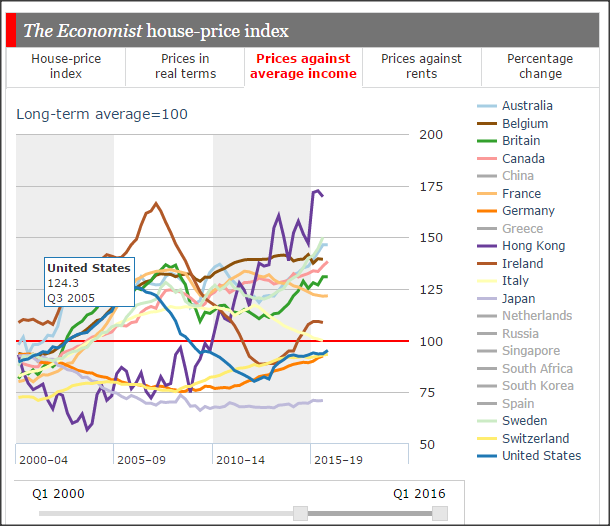 This graph is where  Australia's poor housing affordability becomes really obvious. Because on a global house price scale of house prices V average income  Australia has THE most disturbing trend of ANY developed country  except Hong Kong.

The reason that I am comparing house prices mostly with developed countries is that in theory these countries have gone through all of their major economic phases like the industrial revolution, built advanced infrastructure and should be relatively stable over the last 30 years or so. Counties like China and India are increasing in wages very fast but this is uneven across the country and a comparison of developed countries versus developing countries is close to pointless for the understanding of housing affordability in Australia.

The reason that I say the Australia trend for House prices V average income is disturbing is that except for Hong Kong  Australia is one of the highest house price V Average income countries in the world.  And note this is Average income NOT median income which would be a much fairer estimate of income of the 'median worker'. 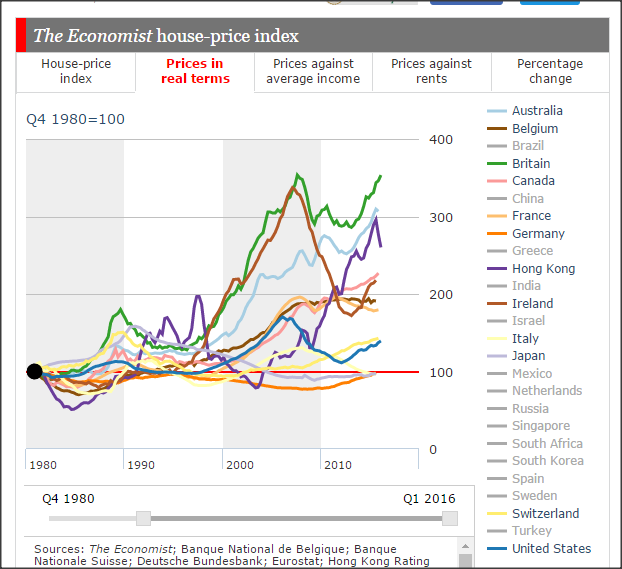 If councils have mostly been able to provide services to householders in their regions for the last 40 years or so in Australia, it makes you wonder what happened before the housing boom ?

Looking at the graph below  Real house prices 1980 - 2016  you can see that there are THREE major countries struggling with unsustainable housing prices  Britain, Australia and Hong Kong.

It is believed that Australia's issue might be unique among these as Britain's housing bubble is mainly constricted to high density areas like London and is also perhaps a function of immigration numbers.  The standard of living graphs suggest that the UK has not massively increased.

The Hong Kong Price bubble occurred after it was handed back from England to China. It has a very high density of living and much of the landmass is already used.

Australia has a relatively low population, hardly and manufacturing industry  yet has one of the highest House price index in real terms of any country over the last thirty years.  The resources boom and immigration levels, as well as urban people wanting to live in the cities for work account for a large proportion of price increases.

The problem with this over inflated Housing bubble is what happens if the bubble bursts?  What happens to the superannuation schemes etc that are reliant on high house prices ?

For investment attractiveness it is assumed that rents will pretty much track housing prices and that is what they mostly do for this graph versus the house price index main graphs.  It shows that Australia is about the third highest rent market after Canada and Hong Kong.

How Australian House Rates are calculated by councils.

A Victorian council website gives this as the rates calculation:  (REF 2)

The Victorian Labor (Australia) government has done something quite extraordinary recently.  They have capped house rates:

" The Victorian Government has introduced rate capping to restrict how much councils can raise their rates each year. In 2016, the Minister set the rate cap at 2.5 per cent."

What Fair Council rates in Australia would look like

The problem with Australia's house price bubble is not only what it means to investment (making it artificially attractive) and high rents, but also housing council rates for home owners and investors alike.

For a long time owning your own house in Australia became part of the fabric of our society. As a simple expectations like the baby boomers had and one of their major life goals (home ownership).

It is true that unsustainable house prices also make it hard for young people to enter the market, but more than that, it makes it very hard to stay in the market once you have bought a house, and are paying extraordinary interest amounts on mortgages (as measured by percentage of average annual incomes). PLUS HIGH COUNCIL RATES.

The solution to inflated Housing Council rates in Australia

To understand how to adjust council rates to fair amounts, it is worthwhile to study another global issue that people and governments are trying to address. Climate change and the over production of man-made greenhouse gases.  The reason that climate change is tied to a value of the year 2000 is that many years ago people realised that they needed to put a stake in the ground.  Have some fair comparative base that was low enough (CO2 production in ppm) that the planet wouldn't disintegrate as fast as predictions were suggesting.

The original carbon levels per country used to be tied to 1990, but by the time that world Government's acknowledged their might be an issue, they were able to let a few more dangerous years slide by and tie the future levels to a later and higher Co2 amount, ensuring that the percentage Celsius amount the planet would heat by was going to be more.

The yr 2000 value that is often referred to in climate change studies is just a convenience, for when Co2 seemed to be slightly below a critical levels, but of course making it exactly year 2000 was relatively arbitrary. Its CO2 levels are much higher than 1990, but a reduction to 2000 levels seen as much more achievable - even though they will result in much more loss of animal species and fauna.

Looking at the global housing real prices index for the last 35 years you can see that even by the year 2000 the top three countries including Australia were between 50% to 100% higher than in 1980.   These countries didn't all run out of land by 2016 - government factors such as tax subsidies and poor external ownership rules etc helped create the bubble which now makes rates very un-affordable (le for most people).

Australia had an average house price index in real terms (ie adjusted by inflation) to around 50% higher than 1980.

So how would you estimate the real value of houses (and rates) to a given value? Perhaps the same way as any product is adjusted - for inflation.

The reserve bank of Australia has an online calculator that shows that something valued at $100 in yr 2000  on average inflation rates in 2016  would be valued at $152.13

That is, in general terms the average item has had a 52% price increase in 16 years.

Since yr 2000 Australia house prices in real terms (adjusted for inflation ) have increased 100% - essentially DOUBLE what the average cost of goods have.

This suggests that based on these calculations, with council rates mainly based on Housing prices, that rates should be approximately HALF what they currently are in 2016 If local councils were playing fair.

So besides the fact that rates rarely drop and Victoria has made a belated baseline of 2016 - the main question should be  what have councils done with the doubling rates over the last 16 years - where has all the extra money gone?   I am sure it is explained somewhere, but considering that councils have not increased productivity, a rate payers income has not kept pace with housing prices, then why should rates be tied to over inflated housing prices making homes much more un-affordable to keep once purchased?

If most council areas within large capital cities have experienced either a house building increase, or in the least medium density building and or  two attached townhouses going up where their used to be one house single level house - surely they have already had maybe a natural 5-10 % bump in rates anyway on top of inflation?

Fair residential council rate prices on houses in Australia would be capped at yr 2000 house prices and rise by the inflation rate from that point on-wards.