I have been monitoring the gluten free online market since Gluten Free Pages began mid 2008. This article is the culmination of that research and in particular the growth and changes of the leading markets around the world over 2009.

This research primarily uses the Google data sets which are normalized to take account of each country’s internet penetration and Google market share.The full article including extra graphs and tables can be found on [ now defunct site] in the Original Articles section.

The FOUR highest gluten free term associated search countries were found to be the Australia, USA, Canada and UK, in that order. There are also separate analysis reports written for each country for 2009 on the Gluten Free Pages website. One of the primary concepts was defined as ‘Celiac searches per month’. The definition of this value is described at the end of this article. In short, this measure is a way of comparing the relative strength of the gluten free market across countries. It equates to the notional value of how many times on average, a celiac (diagnosed and undiagnosed) search for a gluten free associated terms each month.The graph below shows how four of the main countries online demand for gluten free information has increased over one calendar year from Nov 2008 to Nov 2009.

What the celiac search values mean

The size of the sphere is relative to the searches per month in a country. And so the volume of the sphere indicates a good indication of whether total online demand is increasing, which it is in every case as shown in the table above.They Y axis represents ‘raw searches per population per month’. The major reasons that will increase a country’s sphere up this axis is an increase in the number of diagnosed celiac (more people searching) or an increase in gluten intolerant people searching for information.The X axis represents the ‘celiac searches per month’.

For example, assuming 1% of the population are celiac, then a value of 4.0 suggests that if every celiac was diagnosed, then on average they would be searching for gluten free associated terms 4 times per month. While this notational value may not be completely true in practice it does provide a base scale on which to measure and compare all countries. It is noted that America’s corporate marketing machine and search engine optimisation tracking of keywords may also artificially increase their value to some degree.

The USA has made one of the largest gluten free online demand gains over the last year, probably as it recovers from the global financial crisis and more people get diagnosed and act on it. Increasing from 3.1 to 5.5 ‘celiac searches’ is a 77% increase in demand! Australia increased the least over this period (4.2 to 4.8 - a 14% increase), however with a low population ( 1 / 15th of USA) and nowhere near the marketing power that US food conglomerates can use to promote gluten free foods, it can be seen that this modest increase is still quite significant.Both Canada (3.7 to 4.8 – a 30% increase) and UK (2.2 to 3.3 – a 50% increase) increased a similar amount in terms of raw searches per population.All of these countries have at least 80% undiagnosed celiacs in them, so a major driver of gluten free demand is the diagnosis of these people.

This has to do with the affordability of a country’s healthcare, the propensity of people to follow up feeling unwell and the ability of GP’s and specialists to diagnose the disease (which on average can take up to ten years, from the forming of symptoms). This suggests that all gluten free markets under analysis may be very much in the ‘early adopter stage’, meaning that they are all looking for a ‘tipping point’ to turn them into ‘run-away’ growth success. This is vital for a large scale uptake in the supply of gluten free products and easy access to food for celiacs.

The following graph compares the ratio of the seven gluten free groups in the Four major countries for November 2008 and 2009. 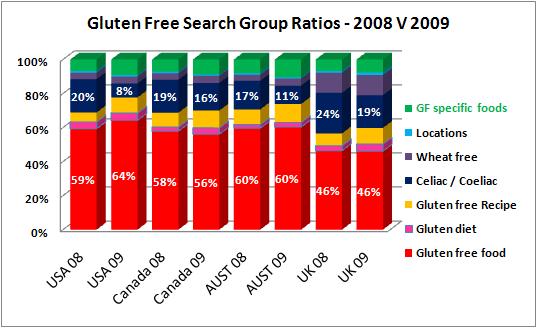 Another major concept of the GFP research is the composition of the major search phrases. With the top 50 phrases separated into the seven groups shown in the table, the changes in the proportions can give a good insight into how the markets are evolving. Previous research found that the leading demand developed countries tended to have a proportion profile that included a generic GF food group (red) of around 60% and a celiac search proportion (navy) of around 20%.The changes over 12 months for each of the leading countries shows a trend of gluten free generic searches remaining moderately stable (USA up 5%, Canada down 2%, Australia and UK unchanged). The one thing they all have in common is a significant DECREASE in ‘celiac related’ search terms. USA ( -12%), Canada (- 3%), Australia (-6%) and UK (-5%).

It is likely that the increased maturity of the market (the diagnosed people no longer searching for celiac topics) and friends and family searching for gluten free foods (rather than celiac information) is behind the relative stagnation in the search volume of 'celiac related' searches. Another consideration is that celiac searches may be made more by medical professionals than consumers or diagnosed celiac.

All of the top online demand countries in 2008 performed exceptionally well in the later half of 2009. The proportion of the major generic gluten free group remained relatively stable while the celiac group fell in all markets. America grew the most in 2009 and Australia and Canada are now nearly equal on the GFP Matrix ‘celiac searches per month’ metric.Peak online demand levels are often found around December, so it will be interesting to see with a recovering global economy whether this extreme growth will be sustained globally into the new year.

One of the primary concepts was defined as ‘Celiac searches per month’= [ raw Google searches x ( 1 / Google market share %) x ( 1 / Internet penetration %) ] / (population / 100)Where raw Google searches = the sum of up to top 200 ‘Gluten free’ associated search term volumes per month.Population is divided by 100 upon the predicate that approximately 1% of the population may be celiac. Whether it is more or less in any country under analysis is a mute point since the level of diagnosis is not accounted for either. While Australian and UK sources confirm the celiac rate is likely to be 1%, some American sites suggest that it is between 1 in 100 and 1 in 133.

This rate would only decrease if the ethnic composition of a country was not susceptible to the celiac causing genes.At the moment celiac disease is considered extremely rare ONLY in people of pure African, Chinese, or Japanese descent. This is because the prevalence of the HLA haplotypes DQ2 and DQ8 is negligible (celiac genes) in these communities. It is noted that races such as African Americans however have recently found to be susceptible to celiac disease. For all the conflicting available information and the affects of marketing increasing celiac diagnosis, this GFP concept provides a good measure to track and compare markets.