INTRODUCTION: This client required articles to be created for their website with breakthrough original content. As I knew very little about this topic and there was no specific information on search engines about the global state of gluten free products I looked at this project as a personal challenge. The client and I have found this project one of the most rewarding projects that I have undertaken.

ACTION: As always with explorative projects I began a wide search on gluten free topics and saw the opportunity to create an innovative ‘market share’ kind of scale similar to the one I developed for Mayne Group (see the Strategy and Analysis article).

RESULTS: This project literally took on a life of its own. The original plan for one week of research turned into three to four full weeks of analysis. You will see from the Articles page that there are articles that analyse the regions of the Americas, Europe and Asia as well as the Global summary.

Similarities between disparate cultures but ones with similar affluence were discovered. Also it was found that small communities of comparatively high wealth English speaking enclaves in large third world countries exhibited the same patterns across the world but vastly different search patterns for gluten free products than the local inhabitants.

I created a notional scale based on ‘Adjusted Coeliac search’ values that are equivalent to the total gluten related raw Google search values (adjusted for community internet penetration and Google market share) then divided by 100 (as approximately 1 in 100 people are considered to be celiac). A plot of the adjusted coeliac value for any country against its economic wealth (GDP per person) shows that there is a logarithmic relationship between the two values. This graph is shown below with Brazil and India at the lower end and Australia, USA and Singapore at the high end.

CONCLUSIONS: While this analysis was well beyond the resources that most small companies would feel comfortable paying for it could be something of great value to larger companies. Almost any market can be analysed and a trend analysis set up to understand how a market's e-demand is changing. The beauty of these statistics are that once a baseline is created, the reports can signal a change in demand often before many other indicators can.

The original article and others like it can be found at: Gluten Free Pages Original Articles

SUBJECT: Global demand for gluten free products is tied to a country’s wealth The GFP Matrix was developed to understand what differences there were in Gluten Markets around the world. This article discusses what people are searching for in the gluten realm including the preference for specific food types which is often dependant on the Tier type and the economic wealth of their community. In this article this research shows:

For analysis the gluten free market was segmented into seven groups:

This research draws together all previous GFP Matrix research and articles on the Gluten Free Pages website and is based on analysis of Google search results for gluten products made in December 2008. The analysis compares communities in the Americas, Europe and Asia. Communities are defined as specific language segments within a country. Most countries have the bulk of their market defined by their incumbent language searches and English language searches. To assist analysis, gluten related search terms were divided into seven groups as shown below. Only the top 50 search terms were used for detailed statistical analysis, but in most cases, these fifty terms represent 95% of all terms.

While it was found that a community’s number of raw searches per population can act as a rough guide to its level of development, there are several exceptions. It was found that at the very low (Tier 3) and high raw searches positions (Tier 1), a pattern emerged in how the search groups are proportioned. See below:

At the high ‘raw search’ end of the spectrum, (AND high adjusted coeliac searches) it was found that there are a high proportion of ‘generic gluten searches’ compared to other groups. It was also found that the majority of these searches were for CORE generic terms such as: gluten, gluten free, gluten free food, gluten free products etc.

And of these generic searches, usually two terms comprise 90% or more of the total group’s searches. There are also usually more than ten generic terms in the top 50 search terms. While several tier 3 communities also have the top two terms being a high proportion of the group, the group usually comprises only five or less terms.

The second highest group is usually the coeliac group. Like the generic group these terms are often CORE terms such as: coeliac, coeliac disease, gluten intolerance etc.

The specific food group on average has a low proportion of seven percent of the top 50 searches.

It is speculated that the reason for the top two groups comprise 70% TO 80% of top 50 searches are that in the generic group, these communities are in high internet penetration and have high economic wealth countries where high demand has created a high supply of gluten websites. The gluten specific websites act like gluten malls with internal search functions that people use to find the gluten info they are after. Whereas in less developed countries these large sites may not exist and people have learned to use unique and three or four word search terms to find what they want right from the search engine stage.

The high proportion of coeliac group searches are most likely by newly diagnosed people and older diagnosed attempting to find if new medical breakthroughs have occurred in the disease. Again CORE terms usually dominate this group because there are enough large all encompassing coeliac devoted sites that provide the answers people are seeking.

What foods to TIER 1 communities search for? The table below shows that bread (1.6); is almost always the first and/ or second searched for term. Then on average the next three most popular specific food items are cake (2.5), dairy (3.5) and pizza (3.8).

While some tier 2 or tier 3 communities may appear to have high generic searches, often a high proportion of these are for non-core terms such as: gluten free breakfast, gluten free snacks, gf desserts, gf gifts. etc

From the table it can be seen that the average raw search value is 0.0016, the average % of Core generic terms is 81% (much higher than the average tier 1 communities) and specific foods is 6% - very close to tier 1.

Assuming that European communities have a typical proportion of coeliacs per population, the low raw searches are an anomaly. These communities have a high internet penetration and relatively high Google market share so the low share is likely to be caused by low diagnosis within the communities. These areas still have a relatively high level of wheat and gluten consumption via breads and pastas so either there is something else in their diet keeping coeliac disease at bay, or they find their gluten products some other way.

These are ‘over performing’ markets. On raw searches per population they appear like tier 3 communities, that is they have very low search values, however when adjusted for Internet penetration and Google share, they have over performing high values for ‘coeliac searches’ per month.

As can be seen from the table, the average raw search values are low size at 0.0035 but these convert to a very high coeliac search value of 5.4. This means that these large population countries have relatively low searches, also have low internet penetration. When values are adjusted for internet penetration and Google market share they have some of the highest ‘per coeliac’ searches of any communities.

Hyper markets also tend to have a lower proportion of generic searches than tier 1 and even tier 3 and the specific food searches proportion lies between that of tier 1 and tier 3.

These hyper communities are also often characterised by being smaller English speaking communities within larger non English lower economic wealth countries. It is likely that these enclaves have a higher than normal proportion of people who have access to enhanced health care (to be diagnosed in the first place) and that their relative wealth makes their gluten free tastes more exotic/ luxurious than even tier 1 communities. For example the top Russian English specific foods in order of search size are: pizza; gluten free beer; gluten free cakes; gluten free muffins.

The two graphs below highlight several important things about the gluten free market. The 'raw search versus adjusted coeliac search' graph shows a linear relationship between the two parameters. While this may be expected, this graph reveals Russia China and Indonesia as anomalies to this trend. As discussed previously, the things these places have in common are that they all have very large populations, are developing countries and have low internet penetration. 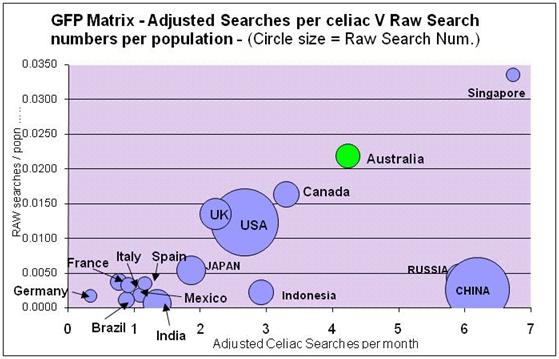 The reasons for these outliers are discussed in hyper markets above however one of the most useful things is to see how so many developed and developing communities are clustered at the undeveloped market end of this graph. While Australia, US and Singapore markets are no where near fully developed as yet (still a large undiagnosed amount of people - much less than the 1 in 100 forecast), it shows that there is a very large room for development in these markets also. As being a coeliac is a disease and has severe medical consequences for its sufferers, it is amazing that very developed countries such as France, Germany and Italy should have such lowly developed gluten demand.

Even more remarkable is the implications of the graph below. When Adjusted coeliac values are plotted against GDP per person, a strong logarithmic trend occurs. Ignoring the effects of outlier hypermarkets such as Russia, China and Indonesia, it can be seen that most countries lie on a steadily decreasing arc as the coeliac values increase.

This graph clearly demonstrates that for the majority of countries analysed that wealth (GDP per person) is a clear indicator of gluten free demand and/ or coeliac diagnosis. While India and Mexico might also appear slightly off the log trend, it should be noted that these countries have very low internet penetration and so the adjustment factors to convert tier raw values into coeliac search values are much more sensitive to small changes in media estimations of internet and Google share.

The Graphs also suggests that particularly for countries with at least moderate internet penetration that knowing their GDP per person value may allow an estimate of their gluten free market development and/ or diagnosis level. 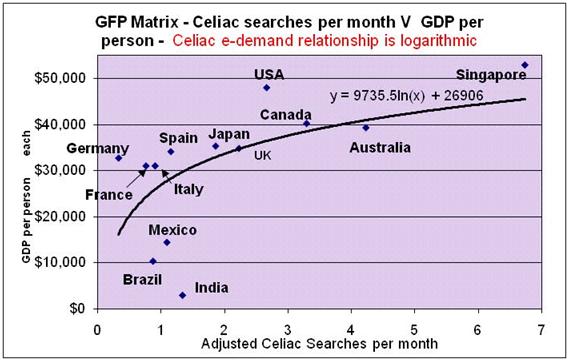 While the detail in this report may be beyond what many businesses require, this style of e-demand analysis can help spot trends and locate growing markets.