The market share data used in this analysis is freely available on the internet. However it is what you do with the data that counts.

WHAT’S IN IT FOR YOU?

Once a website is optimized, depending on the market, it can take a comparatively small regular commitment to maintain it’s search engine rank position. This article looks at how large company's may not always get full value of their website, and suggests why you should look at your current website strategy. 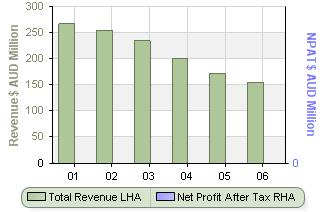 Anecdotal evidence suggests that the company has been trying for the last few years to transform its image from being known as a 'flex' and 'labour hire' company to a major player in the senior executive and talent management space. For this reason and the revenue trend shown above, it is suggested that an effective website presence aimed at engaging clients and quality candidates would surely aid this kinid of company's brand and revenue aspirations.

ISSUE: There is an obvious disconnect (as of 2007) in Drake’s online strategy and their aspirations. The site was stagnant (very few updates) and there were no social networking connection such as blogs, no new market update information, or any tangible current information that would help them back up their assertion that they are a knowledge leader in recruitment

The analysis meant researching the state of the website's optimisation and the core online market that Drake was competing in (recruitment). In regard to online market share (visitors), I gained raw data from a resource that did not contain some of the main players in the Melbourne market such as Hays and Hudson (as these sites did not participate in the third party data collection program). The graph below shows that while Drake is shown to have a market share of around 4% of top ten recruitment searcher visitors in Australia. its actual market share out of the top ten players was likely to be less than 2% (figuring in large players that were not included). 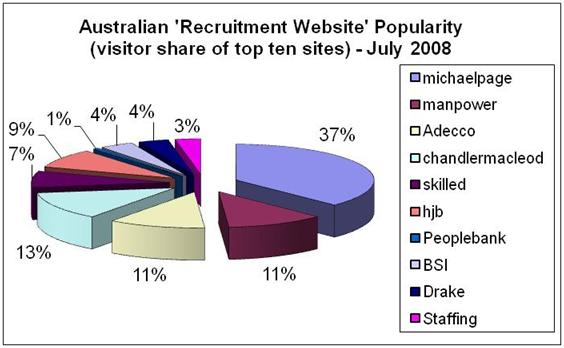 As of April 2009 the Australian site was still not optimized for basic ‘on page’ or ‘off page’ activities. The sites appearance remained dated and there is very little new information or the chance for any genuine visitor interaction (web 2.0) except for the homepage survey. This survey is a standard plug-in that comes with many sites. The level of commitment to this visitor portal is seen by the homepage survey only being changed three times over the last three years.

Most people acknowledge that an online presence is an important part of most business' futures. However not every company has been able to seize the massive opportunity that it represents. As you can see, inability to effectively compete online in a company's core market is not limited to just the small players. It takes will, commitment, skills and usually a small budget at least to attempt to be seen to  be competing.

Another strategic consideration is that recruitment companies typically have low P/E ratios and low assets making market entry relatively easy. In industries like this it is vital that companies look to gaining whatever strategic advantages they can over their competitors - and a high performing website is one of those tools to maintain an edge! Visitor loyalty can be leveraged into real world loyalty of both job seekers and potential clients.

The recruitment industry is very competitive and it is forecast that the global financial crisis may see up to 20% of Australian recruitment companies disappearing in 2009 / 2010.

If you are considering what it might take for you to compete effectively online and begin gaining revenue from this source, please contact me for a discussion.