WHAT'S IN IT FOR YOU?

If you are in a top 500 company right now, you may realize the value or need for such rigorous reporting on the markets that you participate in. Perhaps your market is highly regulated or the media reports reasonable frequent industry values? But without knowing their exact calculation methods, how can you be sure of what the reports mean?

The reports below are the result of diligent full time work, strategy and analysis dedicated to providing unparalleled information about a company’s real time performance.

Whether you are small or large, this kind of information could and should be invaluable to any major growth plans. Sometimes even just paying for a scoping study to find what information sources are available and what you may be able to have your own staff calculate several times a year may be enough. Either way, I look forward to a call if you believe your company could use this kind of work.

HISTORY: Mayne Group started as a parcels company in 1886, founded by John Mayne and Enoch Nickless. By the 1980’s it had become a diversified multinational operating in the markets of freight, transport, security, computing and telecommunications. In the 1990s Mayne Nickless Limited became a specialist service provider of health care and contract logistics. By 2000 Peter Smedley was CEO and 4 of the 6 billion in company wealth were attributable to their health segments.

I was employed as the only Senior Market Analyst in this Australian icon, so I know the following details to be true. Because this company dissolved in 2005 and individual businesses (hospitals) are not identified, the following information is informative however no longer confidential. My Market Share reports were available to senior management for at least 15 months of my 18 months tenure. In this case it was seen that while Mayne Group’s revenues were rising, the market was rising much faster, showing severe negative growth in many of their major markets. The effects of this are discussed in the Conclusions … and shown in the hospitals trend graph.

MISSION: The Mayne group was rapidly growing by a health centered acquisition strategy for its four main health divisions. These included Hospitals, Pathology, Diagnostics and General Practices. My role was to be their sole Senior Market Analyst and for the first time in their history, creating accurate monthly reports that forecast their market share in each division in each state. I also acted on ad-hoc projects for the logistics division. This section looks exclusively at some of the results and issues associated with the health market share reports.

ACTION: Gathering internal revenue and performance information proved as difficult as accessing external public and private data. Many of Mayne’s new acquisitions continued to act as autonomous units often reporting in non standard format and frequency. Information and data needed to be collected, checked, converted to accurately forecast Mayne’s revenues and the total markets values. This was during the time of the Government’s introduction of the healthcare rebate system that meant that large tax incentives were driving the marketing through a high growth phase.

RESULTS: For the first time in Mayne’s history I was able to provide them with accurate market information on each of their health segments which when presented to senior management and the board, assisted the allocation of resources and future growth strategies.

The following tables show the end results of the analysis that I performed. I have included tables for the hospitals division and diagnostic imaging markets. The vital point is that this period was during Mayne's acquisition phase and high Australian market growth, yet their market share was negative!

Towards the end of its existence, Mayne controlled approximately one third of all private Australian hospitals and one sixth of all hospitals overall (private and public). Early analysis of Mayne’s declining market share in a rising market meant that I proactively put forward several proposals for primary market research that could lead to strategies to counter the declines. Two of the major contributing factors were regularly highlighted in the Media who suggested a backlash by the public against such a concentration of power and doctor disputes based on cost cutting policies in their hospitals.

My market share reports and requests for research, if fully acted upon could have made a difference in the fortunes of the Mayne Group. The graphs below show Mayne Group's hospital sector market share and the Diagnostic Imaging market share. Shares were also calculated for Pathology and General Practitioner markets. 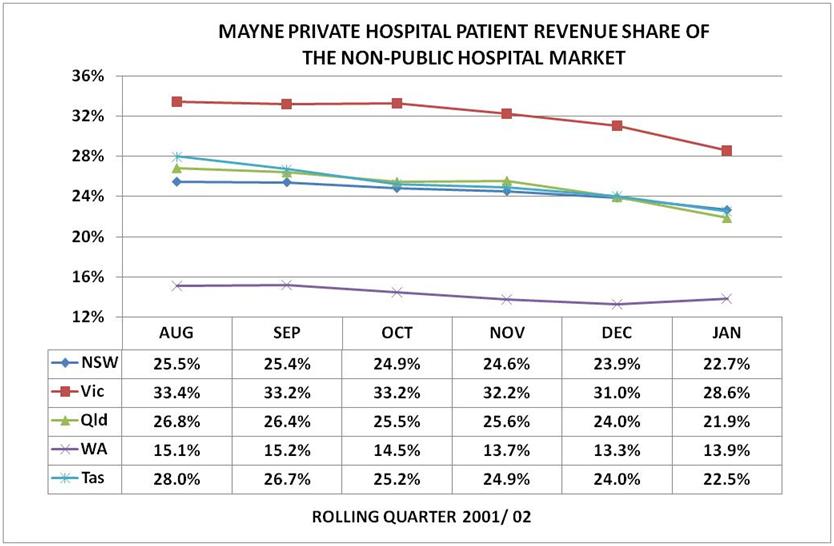 Highly detailed market share reports are vital for any large business interested in understanding how well it is competing in any given market.

Smaller companies can also benefit by understanding what % of a niche market they intend on capturing and how much budget to allocate. If either of these examples apply to you, you may like to give me a call.

Other market share tables for Mayne Group are shown in the Market Research section of this site.